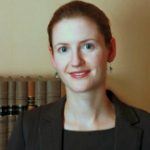 Alice was educated at Wycombe Abbey School and Oxford University, where she read classics. She was called to the Bar as an Inner Temple scholar and inaugural Allan Levy scholar.

Within her civil practice she undertakes fast track trials and regularly advises on quantum and liability arising out of personal injury claims. She has particular experience in civil actions brought on behalf of or against the police and accepts instructions to appear in inquests.

Her growing employment law practice includes advising Local Education Authorities on employment issues within schools, and she has also acted as the Legal Officer in internal school disciplinary hearings.

Recent criminal trials in which she has been instructed for the defence or the prosecution include:

R v Poldrack [2012] Importation of over 4kg heroin, one of the largest seizures by the UK Border Agency in 2011.

R v Nguyen [2011] Conspiracy to facilitate illegal entry: the Defendant was the only English person to be prosecuted in a European police investigation of a Vietnamese smuggling ring that led to over 40 arrests in 6 different countries and numerous linked foreign trials.

Alice is also instructed by local authorities and defendants in regulatory cases involving issues of consumer protection and health and safety.