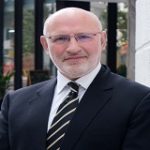 “He has handled a diverse range of commercial cases and is especially noted for his expertise regarding shipping disputes”.

Chambers Global Guide [2019] Dispute Resolution - The Most in Demand Arbitrators

Andrew G Moran QC is an independent, full-time, international commercial arbitrator, with over a quarter of a century’s experience as arbitrator and judge, in the determination of an extremely wide range of commercial and maritime disputes.

His primary office and base is at The Arbitration Chambers of Singapore in Maxwell Chambers; but he also has bases from which he is able to arbitrate in the UK (London), and Continental Europe (Paris and Geneva). He was in practice for over 40 years as Counsel (nearly 25 years as Queen’s Counsel) and in that role he led teams of lawyers in conducting many complex commercial, civil and maritime cases.

As part of Andrew’s extensive dispute resolution practice he has developed an expertise in Neutral Evaluation and Neutral Evaluative Mediation both on documents and with parties present. He has undertaken three such cases this year. Within such cases Andrew will often be asked to perform a binding or non-binding neutral evaluation in which he is asked to indicate or make findings of fact and law and predict the outcome of the massive hearing in prospect at a fraction of the cost, thus reducing the costs for all those involved.

Six Pump Court will host a webinar dealing with the long-term effect of the Coronavirus on international arbitration. The webinar entitled International Arbitration and Virtual Hearings – A New Era Dawns, will be chaired by Stephen Hockman QC and will take place on Friday 4th September 2020 at ...

Chambers is pleased to welcome as an associate tenant Andrew Moran QC, a full-time international commercial arbitrator based primarily in Singapore, who will complement and enhance our growing interest in various forms of international dispute resolution. You can view Andrew Moran QC's ...