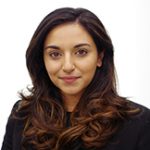 Angelica is a barrister at Six Pump Court with a broad common law practice. She undertakes advisory and litigation work in courts and tribunals for a range of clients, including Government departments, local authorities and global and national companies in the FTSE 100.

Angelica joined Chambers in 2018 following successful completion of her pupillage. Prior to the Bar, Angelica worked as a paralegal at Mischon de Reya and Charles Russell Speechlys LLP. She also has experience working as a County Court advocate, appearing in over sixty civil applications, possession and Stage 3 disposal hearings across London and the South Eastern Circuits.

Having studied law, Angelica was awarded a distinction in her postgraduate law degree. Now in practice, Angelica lectures to students studying the Planning and Property Law module at her former University, University College London. She speaks conversational Spanish and is embarking on learning Italian.

Angelica delivers training for planning officers, providing them with practical advice when giving evidence at inquiries, most recently speaking at the Royal Town Planning Institute and for students at UCL.

Angelica has a growing employment practice and has been instructed to represent and both Claimants and Respondents both in the Employment Tribunals and in the Employment Appeal Tribunal. She also has experience of employment crossover disputes, recently appearing as sole Counsel in the High Court in relation to a claim for injunctive relief following a claim issued against former employees relating to breach of restrictive covenants.

She has experience of multi-day breach of contract, unfair dismissal, and discrimination claims – the latter of which she has a particular interest in, having volunteered for the Free Representation Unit (FRU) as an Employment Tribunal Representative. During her time with FRU, Angelica appeared at full contested hearings on behalf of individuals without access to legal representation.

AM v An Academy

Angelica has experience of planning law and has been instructed as sole Counsel to represent parties at inquiry-level as well as draft Pre-Action Protocol Letters and grounds of appeal in respect of planning judicial review claims in the High Court.

Angelica receives regular instructions to prosecute cases on behalf of local authorities, which include first appearances, full trials and sentencing hearings, in the Crown and Magistrates’ Court.

She has appeared in Court in relation to cases involving: residential fly-tipping; breach of planning enforcement notices; unauthorised works to listed buildings, protecting rights to “quiet enjoyment” of land and appealing abatement notices.

In addition, she also has a busy paperwork practice and has advised a range of individuals in relation to: GDPR rights; prior approval; pre-application discussions; “fall back”; curtilage and the extent of a listed building; purchase notices; common land; listed buildings and frequently provides advice for individuals seeking to judicially review decisions to grant permission.

Angelica has experience of representing clients, both Claimant and Defendant, in small, fast and multi-track cases, case management hearings and appeals.

Notable examples of Angelica’s work include:

Angelica spent five months of her pupillage with Simon Taylor observing trials where the offences included manslaughter and kidnapping.

Angelica regularly appears in the Crown and Magistrates’ Court undertaking trials and in the Crown Court, prosecuting and defending committals for sentence and appeals against conviction and sentence.

Angelica is currently instructed by a Local Authority to prosecute in a multi-day trial involving unlawful eviction and harassment of tenants in the Crown Court.

Notable examples of Angelica’s work include:

Angelica Rokad is qualified to accept direct instructions from members of the public under the Public Access Scheme.

Certain specific Public Access services are subject to price and service transparency regulatory requirements. By clicking the link below you will be directed to the required information for those specific categories of work in respect of which Angelica accepts instructions.

Employment Tribunal Cases (advice and representation for employers and employees)

Recent case law from the Planning Court - Women in Planning

Horsham District Council’s planning committee have approved a major application to build the new facilities, which will include a new all-weather running track, sports centre extension, car park and floodlit 3G sports pitch and, uniquely, an Exploratorium. The application was refused several ...

On Friday 19th June, Six Pump Court will host a webinar entitled Heritage Assessment and Design in Planning Decisions. Anne Williams, Megan Thomas and Angelica Rokad will provide a refresher on carrying out heritage assessments, including how to avoid common pitfalls and other tips. She will ...