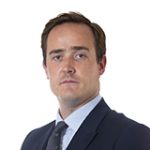 Ben is an experienced and highly regarded barrister specialising exclusively in criminal law and associated fields.

His particular areas of specialism include:-

Ben has extensive experience in serious and complex fraud (including SFO, CPS and FCA prosecutions) as well as POCA and confiscation generally.

Between 2014-2016 he was employed by the Serious Fraud Office as an Investigative Lawyer. He dealt with two highly complex cases arising out of the financial crisis of 2007. One of his cases concerned an allegation of fraud in the £100’s of millions, the other involved investigating suspicious activity in the very heart of the financial system.

Highly experienced in cases concerning drugs supply and has acted in countless cases with issues around conspiracy, intent, duress and test purchases.

Ben regularly acts for Kent police and individuals in applications for SHPOs, SROs, DVPOs as well as in firearms licencing matters.

He is also frequently called on by companies and private clients to assist in road traffic prosecutions.

Ben is experienced in mutual legal assistance and in extradition cases where he acts on behalf of requested persons both at first instance and on appeal.
He has acted in conviction and accusation cases and is able to advise on the applicability of bars to extradition, human rights considerations and bail etc.
He readily accepts instructions from the first stage of proceedings through to appeal in the Administrative and Divisional Courts.

R v LH (Maidstone Crown Court) – one of three men tried for alleged involvement in a major wine investment fraud. Acquitted of all charges. LINK.
R v CF (Inner London Crown Court and Central Criminal Court) – Two trials over the course of a fortnight, acquitted of weapons charges following an attempted murder in the first trial, acquitted of possession with intent to supply crack cocaine in the second trial (after having been arrested in a car with large quantities of drugs, cash and a drugs phone in his pocket).
R v Singh and Sharma (Isleworth Crown Court) – successful prosecution of a gang of robbers who targeted elderly and vulnerable Indian women in Southall for their jewellery, case involved extensive CCTV, cell site.
R v Ali (Wood Green Crown Court) – s.18 stabbing, gang attack. Acquitted after trial.
Operation Mirror – SFO investigation into agreements between Barclays and Qatari investors during two capital raisings effected in June and October 2008.

Has successfully represented protestors exercising their democratic rights (whether through novel means or otherwise).
Secured a defendant’s acquittal on the basis of duress after he absconded following the first day of trial and was tried in absence.
Drafted Privy Council petitions after reviewing Caribbean murder convictions pro bono.
Spent 18 months as a Case Review Manager at the Criminal Cases Review Commission, can advise on appeal whether direct from an adverse verdict / ruling or via the CCRC.

Congratulations to our colleagues Ben Irwin and Amy Nicholson who have been appointed as Recorders with effect from 26 January 2022. Both Ben and Amy will be assigned to the South Eastern circuit dealing with Crime.     ...

Richard Wright QC leading Ben Irwin prosecuted this case, tried before the Honourable Mr Justice Goss at Luton Crown Court. The defendant, still aged 16, was convicted after trial of the murder of his 16 year old victim. He was today sentenced to life with a minimum term of 16 years ...

The Court of Appeal today allowed the appeals against conviction brought by a number of sub-postmasters on both abuse of process limbs, ‘fair trial impossible’ and ‘affront to public conscience to prosecute’. In Carl Page’s case, the Post Office conceded the former but contested the ...