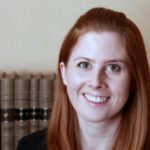 “Excellent, approachable and an outstanding advocate.”

“Thorough, bright and a pleasure to work with.”

“She demonstrates particular expertise in unfair dismissal and discrimination claims. “She has helped us to obtain very good results, employing novel and innovative arguments.”

“An intellectual who thinks outside the box.”

Grace graduated with a law degree from Trinity College, University of Cambridge where she was awarded a Part 1A Tripos Prize and Whittaker Scholarship. She was called to the Bar by Lincoln’s Inn in 2005 as a Hardwick Scholar.

Grace is recommended in Chambers and Partners and Legal 500 for her work in Employment law.

Grace has acted in a number of high profile cases for both employers and employees, including:

Grace also has a strong advisory practice, which is complemented by her health and safety at work expertise, including stress at work and personal injury claims.

In addition, Grace regularly lectures on Employment law for CLT, leading Employment solicitors in London and Manchester and has lectured on civil law for the Kent Law Society.

Grace is a member of the ELBA.

Civil/Health and Safety at Work

Grace regularly acts for both Claimants and Defendants in fast and multi-track cases, including life-altering injuries and stress at work claims. She has a particular expertise in health and safety at work cases, including construction sites, factories and warehouses.

Grace also has experience in respect of contractual disputes and landlord and tenant. Grace successfully appeared in the Court of Appeal in respect of a leasehold service charge dispute in which she acted for the freeholder. (Freeholders of 69 Marina v Oram and Ghoorun [2011] EWCA Civ 1258).

Stemming from her busy civil and health and safety practice, Grace represents and advises interested persons at Coroner’s Inquests.

Grace Cullen is qualified to accept direct instructions from members of the public under the Public Access Scheme.

Certain specific Public Access services are subject to price and service transparency regulatory requirements. By clicking the link below you will be directed to the required information for those specific categories of work in respect of which Grace accepts instructions.

Employment Tribunal Cases (advice and representation for employers and employees)

Members of Six Pump Court’s Employment team have started a new blog to provide the latest employment law news stories and legal analysis, concentrating on the issues that arise in the workplace due to the Covid-19 public emergency. Recent articles cover the guidelines published this week ...