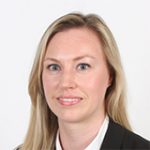 Nicola Strachan has a practice in commercial litigation and arbitration, public law and planning (including compulsory purchase). She also acts for a number of clients in the UK and overseas in relation to oil and gas exploration including shale gas and fracking and climate change.

Nicola has appeared in a number of reported judgments and is regularly instructed in cases where she acts as sole Counsel or as a Junior to Leading Counsel. She has the reputation of being a strong and tenacious advocate and of having commercial acumen and good judgement. Highly regarded by professional and lay clients, she has developed a strong client base.

Nicola was also called to the Seychelles Bar in 2021.

In September 2019 she successfully acted for a claimant in an insurance action in the High Court against American Express and AXA Insurance. The claim arose out of the failure on the part of the Defendants to provide emergency repatriation to the UK when the claimant suffered an illness in Dubai.

She represented Grosse Investments as Junior Counsel in the St James Edinburgh Compulsory Purchase Order which resulted in a major Public Inquiry held in Edinburgh in 2015. This was one of the largest compulsory purchase order cases ever held in the UK and concerned the acquisition of land and interests for the purpose of redevelopment of the St James Retail Quarter in the heart of Edinburgh. It was a scheme encompassing an £850 million investment project. Her clients were the feuholders (freeholders) of the John Lewis department store. The case involved a multiplicity of legal and factual issues. These included a consideration of section 189 of the Town and Country Planning (Scotland) Act 1990 and in particular the meaning of land which is “required” for the development, the meaning of “best price” and “best terms” and a consideration of the statutory criteria which had to be taken into account in deciding whether to confirm the Order. It was the feuholder’s case that the Order had been made without proper authorisation by the Council, was ultra vires section 189, that best price and value had not been obtained from the Developer and that the Council had acted for an unauthorised purpose and had taken into account irrelevant considerations.

She successfully appeared in a High Court challenge on behalf of a Local Authority in an appeal against the decision to impose Council Tax on a private home.

Nicola has provided tax advice as to whether a university college was eligible for VAT zero rating in relation to major alterations to a Grade II listed residential building. She has also advised on whether a builder was acting as the principal in relation to the performance significant contractual works and consequently whether he should have been registered for VAT.

She has been instructed as Junior Counsel by Powys County Council. Powys replaced the Office of Fair Trading and is now the Lead Enforcement Authority charged with exercising and discharging regulatory powers and duties throughout the UK in relation to estate agency work pursuant to the Estate Agents Act 1979. Under the Act, Powys proposed to make a prohibition order against two estate agents who had been convicted in the largest ever case of insider dealing in the UK. The affected parties gave notice that they wished to make representations orally to the Enforcement Authority. Powys proposed that oral representations of the Claimants would be heard by the investigator and that the adjudicator would be given an audio recording and transcript of the oral exchange. The issues in the case centred on the right to a fair hearing and natural justice.

Nicola is experienced in licensing matters including but not limited to alcohol and entertainment, gambling and taxis. She is regularly instructed by Local Authorities and private landlords in relation to breaches of HMO licences. She frequently appears on appeals to the Magistrates’ and Crown Courts and in the High Court by way of Judicial Review proceedings.

Nicola’s has substantial public law experience including representing Government departments and Local Authorities in tribunals and in judicial review applications.

She acted for the owners of a livery in a Judicial Review challenge to a decision of Windsor & Maidenhead Borough Council relating to planning enforcement and breach of condition notices.

Instructed as Junior Counsel in a Judicial Review claim against the decision by a London Authority to pedestrianise three streets as part of the commencement of the Ultra Low Emission Zone. This involved the balance of private and public law interests as an international hotel group sought to argue that preventing the access of cars to the area was detrimental to the interest of its customers.

She has been instructed as Junior Counsel by the Government of France in judicial review proceedings challenging a decision of the Royal Borough of Kensington and Chelsea. This was a high profile case which received extensive press coverage in respect of the validity of two Certificates of Lawfulness granted for a “mega-basement” owned by Jon Hunt (the former owner of Foxtons Estate Agents) at 10 Kensington Palace Gardens, London. The case not only raised issues relating to the principles of the commencement of development, the status of certificates granted in breach of conditions, the statutory powers to grant certificates, but more general issues as to the extent of legitimate expectation and consultation. The case is awaiting further determination by the Court of Appeal.

Instructed to bring proceedings against the decision of a Local Authority to extend two Conservation Areas in central London. It was argued that decision was ultra vires section 69 of the Planning (Listed Buildings and Conservation Areas) Act 1990 and that it was procedurally unfair due to flaws in the consultation process.

Nicola has a wide range of expertise including Judicial Reviews and statutory challenges under the Town and Country Planning Act 1990. She regularly appears in the High Court and in Planning Inquiries for commercial clients and Local Authorities in cases involving ex parte injunctions, Development Plans, applications for planning permission, minerals, enforcement, material change of use, Permitted Development Rights, listed building consents and tree preservation Orders.

In June 2019 she successfully appeared on behalf of the South Downs National Park Authority in a week long Public Inquiry dealing with the retention of key employment land in Petersfield, Hampshire.

On behalf of Cheshire West and Chester Council, Nicola was led in in a six week public inquiry in early 2019. The inquiry looked at the relationship between shale gas development and climate change. It was the first Public Inquiry to deal comprehensively with the issue and has now been called in by the Secretary of State for determination.

In September 2018 she was led by Leading Counsel in a successful challenge by the South Downs National Park Authority to Highways England’s decision in the selecting of the preferred route for the A27.

She has appeared in a Planning Inquiry on behalf of a developer in Beverly, North Yorkshire, in relation to Permitted Development Rights, allegations of material change of use and breach of conditions.

Nicola successfully appeared in an appeal on the refusal of planning permission by a Local Authority to allow for the material change of use of a building from commercial to residential.

Nicola represented a Local Authority in a case which involved the determination of whether pig arcs required planning permission. It raised difficult issues as to the consideration of applications for planning permission where the application focused on the need to consider the cumulative impact of granting planning permission with an allegedly existing unlawful use of land. It also had to address the meaning of “intensive livestock installation” in the relevant European Directive. The Court’s finding has been subject to some critical commentary.

She was instructed as Junior Counsel by the South Downs National Park Authority in a major Public Inquiry into a proposal to build a free boarding school at the former at St Cuthman’s School in Stedham, West Sussex. The application was for a weekly boarding school in a Grade II Listed Building to support the existing Durand Primary Academy in the London Borough of Hackney. In accordance with section 116 of the National Planning Policy Framework, there was a significant presumption against major development in National Parks. It was the National Park Authorities’ case that the Applicant had failed to demonstrate that there was no scope to meet the need outside the South Downs National Park. Further, significant harm would be caused to the landscape character of the site and the area from the extent, scale and nature of the proposals both in use and whilst under construction and the extension would have a detrimental effect on the Listed Building.

Nicola was led in in a six week public inquiry in early 2019, having been instructed by Cheshire West and Chester Council. The inquiry focused on the exploratory phase of hydrocarbon extraction from shale as well as the relationship between shale gas development and climate change. It was the first public inquiry to deal comprehensively with the issue and has now been called in by the Secretary of State for determination.

Instructed as Junior Counsel by a Planning Authority relating to a planning application for exploratory drilling for oil and gas in a National Park. The applicant failed to demonstrate that there were exceptional circumstances for such a major development to take place within the protected landscape and that the development was in the public interest. The case raised important issues relating to the balancing of competing public interests; the need to secure sustainable energy and the need to conserve the natural environment.

Nicola has been involved in high profile and significant cases with a police law element. She was one of the first people in the country to successfully obtain a Violent Offender Order. This type of Civil Restraint Order seeks to protect the public and to manage the risk posed from violent offenders by imposing prohibitions against dangerous and violent individuals beyond the period of their sentence.

She is regularly instructed to obtain Freezing Orders, Production Orders in respect of bank accounts and Confiscation and Cash Seizure Orders under the Proceeds of Crime Act 2002.

Robert Griffiths QC and Nicola Strachan were called to the Bar of Seychelles in December 2021 and appeared in the Supreme Court of Seychelles in a major civil dispute arising out of the Seychelles Civil Code. The case involves a claim made against the estate of France Albert Rene, the former ...

Robert Griffiths QC and Nicola Strachan are representing small traders who have filed claims against the London Borough of Hammersmith and Fulham Council and are seeking damages arising out of its closure of the weekly farmers’ markets. It is argued that the case raises an issue of major ...