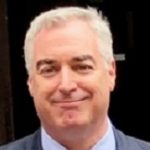 Paul McGarry SC was Chair of the Bar of Ireland from August 2016 to August 2018. He is a private client barrister and experienced international arbitrator.

He was called to the Bar in 1996 and appointed a Senior Counsel in 2010. He is a member of the Bar of England and Wales since 2012. He is also a member of the Bar of Northern Ireland. He is an accredited mediator and international arbitrator, and a Bencher of the Honorable Society of Kings Inns. He speaks fluent French and has a working knowledge of Spanish. In 2018 he was elected a Master of the Bench of Middle Temple.

He has an extensive practice in European and Private International Law. As an advocate, he appeared many times before the Luxembourg Courts in cases relating to Environmental, Competition, Trade and Fisheries issues. He was chairman of the EU Bar Association (2017-2020), head of the Irish delegation to the Council of European Bars (CCBE) from 2014-2019, and a is member of the Executive Committee of the European Circuit since 2018. He has written extensively and contributed to conferences, seminars (and webinars) on EU law topics.

He is currently Vice-President of Arbitration Ireland, was a director of the Dublin Dispute Resolution Centre (2016 – 2021) and a former Chairman of the Arbitration Committee of the Bar of Ireland.

As an arbitrator he has dealt with many disputes involving international insurance claims, maritime law, professional negligence, reinsurance and financial services. He is an ICC appointed arbitrator in disputes relating to energy and engineering works, is a member of the LCIA, and has advised or represented clients in arbitral disputes under ICC, LCIA, CAS and adhoc rules. He has spoken at many arbitration events organised by the IBA, UIA, CCBE, ABA, Arbitration Ireland and ICAB.

His litigation practice is primarily in European, commercial, insurance and international law. As a silk, he was counsel for the plaintiff in KBC v Byrne Wallace and for the defendants in the BUPA v HIA litigation concerning health insurance. He was lead counsel for the appellant in the Koger copyright appeal and for the State in cases involving liability in tort (Cromane Seafoods) and international law (Barlow II). He has also appeared in many professional negligence claims involving solicitors, accountants and doctors. He is on the panel of assessors for the Medical Council.