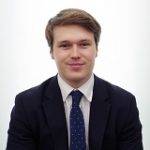 William joined Chambers in 2019 following the successful completion of his pupillage under Simon Taylor, Mark Beard and Christopher Badger.

William spent four months of pupillage with Mark Beard during which time he observed a variety of planning matters including a planning inquiry, various High Court hearings and the examination of the Epping Forest District Local Plan.

He spent a further four months with Christopher Badger focusing on environmental law and gained an insight into both prosecution and defence work.

William has, in his own right, appeared for both the prosecution and defence with regard to fly-tipping offences.

He is also contributor to Chambers’ Environmental Law Blog.

During pupillage, William produced written advices relating to professional negligence, the administration of estates, power of attorney, nuisance (both public and private) and landlord and tenant disputes.

During his second six, William gained experience representing clients in relation to a variety of matters including landlord claims for possession, infant settlements and the division of assets following relationship breakdown. He has also appeared in the winding up court.

William spent four months of pupillage with Simon Taylor and observed a wide variety of hearings, including trials for conspiracy to murder, rape and grievous bodily harm.

William has, in his own right, undertaken trials in the Magistrates’ Court and has appeared for both the prosecution and defence in other hearings including first appearances, committals for sentence and appeals against conviction and sentence.

The appellant had appealed the decision of the local council not to grant planning permission for the development of a low carbon home built in Bothenhampton, Dorset. The inquiry was the result of a long-running dispute over whether the building broke local planning regulations. Anne called 4 ...

Homestead planning inquiry to begin in May

Anne Williams and William McBarnet will represent the Appellant at this four day planning inquiry starting on 4 May 2021. The inquiry which relates to the Homestead, a low carbon home built in Bothenhampton, Dorset is the result of a long-running dispute over whether the building breaks local ...